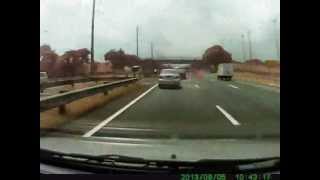 A 1.5-hour trip of approximately 72 kilometers between the South Metro-Manila Skyway’s Magallanes on-ramp and the town of Pila, Laguna compressed into 6 minutes.

END_OF_DOCUMENT_TOKEN_TO_BE_REPLACED

First seen circulating the Internet at least a year ago, this poster with anti-carjacking tips is once again doing the rounds online.

The poster gives tips on

At the bottom, it says;

Evidence Concealment/Cover-up Fail: Crashed UFOs recovered in the Philippines have been installed as lighting sculptures at Eton Centris Walk.

Wanna see moar of the flying saucers? Do a Google Images Search.

This below is about one of my granduncles/great-uncles.

He was also named the oldest driver to ever win the series’ Senior Class at age 77.

He will defend his crown in the 4th Mindanao leg which is scheduled on August 21 at the same venue. 😀

Below are videos of the race runs and selected photos of the event.